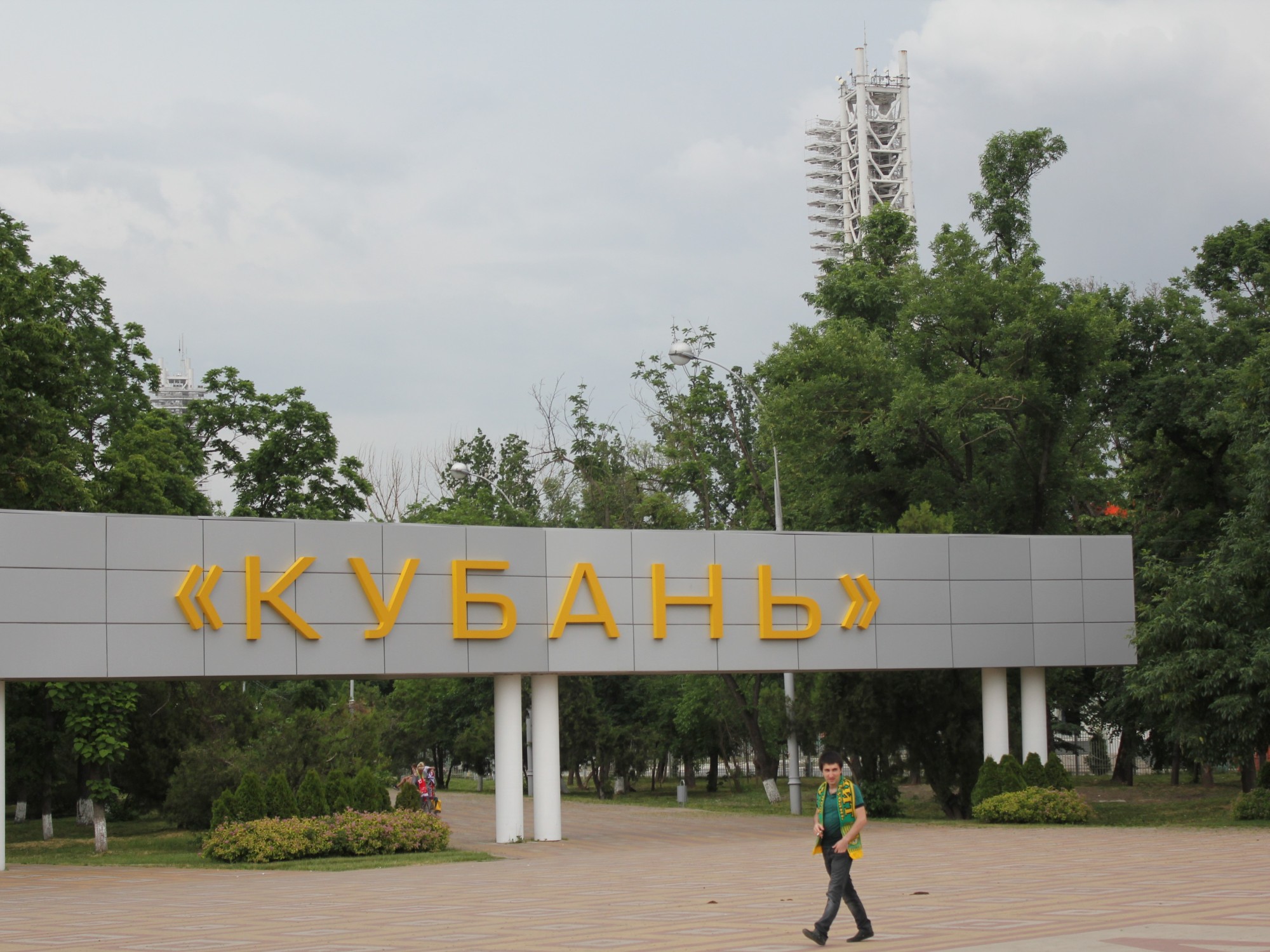 Is this the biggest non-league ground in the world? When Kuban Krasnodar, one of Russia’s oldest professional clubs, went bust in May 2018, the southern city’s 35,200 seater stadium became the home of a Kuban phoenix playing in the Krasnodar Regional League. This level of Russian football, typically attracting crowds of a few dozen to see clubs like Rubin Amateurs or Burevestnik suddenly inherited a huge, historic stadium. In terms of capacity, it’s bigger than Gatehead’s International Stadium; Moscow’s Izmailovo Stadium may theoretically hold more, but in its current condition it’s hard to imagine it could safely accommodate a crowd of 30,000 or more, even if there was any chance of that many people wanting to see Sportakademklub in action.

So, it appears that this venerable Soviet stadium is a record breaker. But how did it end up at this lowly level?

As recently as 2013, Kuban was playing in the Europa League. A play-off win over Feyenoord put the Cossacks into the group phase where they finished third behind Valencia and Swansea. Yet, by the time I visited in 2015 for a game against Arsenal Tula, the problems were mounting. On the field, apparently, all was well. The team was on its way to a Russian Cup final for the first time in its history. However, the fans were unhappy. This was the last home game of the season, it finished as a convincing 5-1 win over already-relegated opposition and the big match should have been in everyone’s minds. Instead, the half-time video display was telling a tale of battles against adversity amid pleas for patience and support.

The problem, as always, was money. Kuban, founded in 1928, derived the bulk of its funding from the Krasnodar Regional authorities. By 2015, the tumbling value of the rouble, falling oil prices and the impact of sanctions against Russia following the annexation of Crimea meant that the money was running out. This old-school model of club ownership, paid from the public purse in the hope of gaining national prestige for the region and local popularity for the politicians, was failing. Across town, FK Krasnodar was building an impressive modern stadium and competing at the top end of the Russian Premier League using the finances of a supermarket magnate. Kuban was being left behind.

The club’s response was to play up its history. While FC Krasnodar’s advertising focussed on introducing youngsters to the game – and the complex around its stadium was dominated by a steady string of kids heading to Saturday morning age-group games – Kuban dug out the grainy black-and-white snaps of the stars of yesteryear and highlighted the triple values of ‘History. Tradition. Victories.’ This tripartite sloganeering has been popular in Russia since the Tsars summed up the country’s foundations as ‘Patriotism. Orthodoxy. Autocracy’. Sadly for Kuban, its fundamental trinity was no more enduring than Nikolai II’s; in a Russian football revolution, the old guard was comprehensively usurped by the new. The club museum was shuttered and, within a season or two, the club itself would go the same way.

Now, maybe, it’s on the way back again. April saw the start of the season in the Krasnodar Regional League. In its early years, still known as Dynamo, the club won this league repeatedly either side of the Great Patriotic War. Now, with three games left, Kuban is third and could secure a bronze medal with victory at Spartak Gelendzhik tomorrow. The following weekend brings final home game of the season against league leader Kuban-Holding; unusually at this level, tickets are on sale as the club looks to finish with a big crowd. However, there’s competition in town – and not just from FC Krasnodar. Following Kuban’s collapse, Krasnodar got a new professional club, Urozhai – Harvest – playing in the yellow-and-green colours of Kuban and starting out in the third tier of Russian football.

Visitors will see a classic Soviet-era design. Built in 1960 and expanded 20 years later, it has two imposing stands with two tiers down the sidelines and two large curves behind the goal. The running track is a frustration common to most arenas built by the Communists. Highlights include the epic floodlight pylons and an old-school scoreboard, upgraded to include video screens rather than the flickering light bulbs that once picked out portions of the names of goalscorers.

So far, though, the crowds have not returned. A disillusioned 6,500 or so turned out for that Arsenal game, about average for a mid-table Russian Premier League team at that time but a far cry from the five-figure attendances that earned the team a reputation as the most passionately supported in the land. Today, crowd figures are scarce – the lower leagues rarely supply them, although Urozhai seems to get a few hundred at best – but it’s hard to imagine thousands coming here in the way that, for example, Darlington’s fans stuck by their team after its ignominious demotion down four divisions. Will this phoenix rise again? Ultras elsewhere in the top flight have produced displays in support of Kuban at games against the unloved FK Krasnodar, but the sight of 26,000 fans heading to the Bull’s most recent home game against Krylya Sovietov suggests that the battle for hearts and minds may already be won and lost in the city itself. 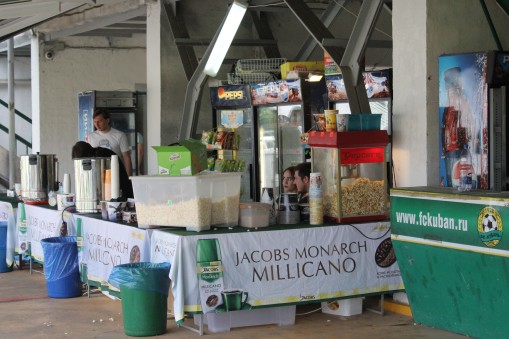 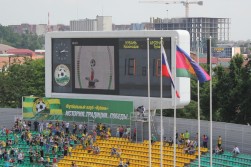 The scoreboard at the Kuban Stadium, Krasnodar. Below the screen, the slogan reads ‘History. Tradition. Victories.’ 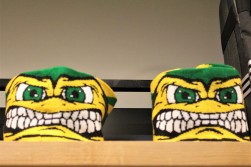 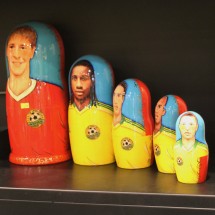 Memories of club legends at the Kuban Stadium, Krasnodar.

A rustic view of the floodlights at the Kuban Stadium, Krasnodar. 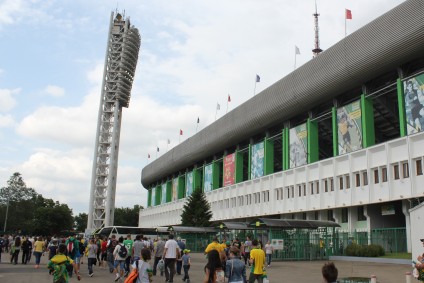 Outside the Kuban Stadium, Krasnodar. 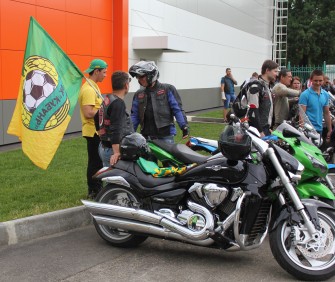 A biker flies the flag outside the Kuban Stadium, Krasnodar. 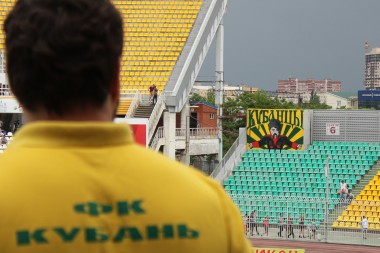 Cossack imagery for the ‘Kubantsy’ at the Kuban Stadium, Krasnodar. 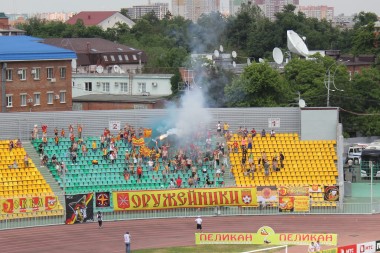 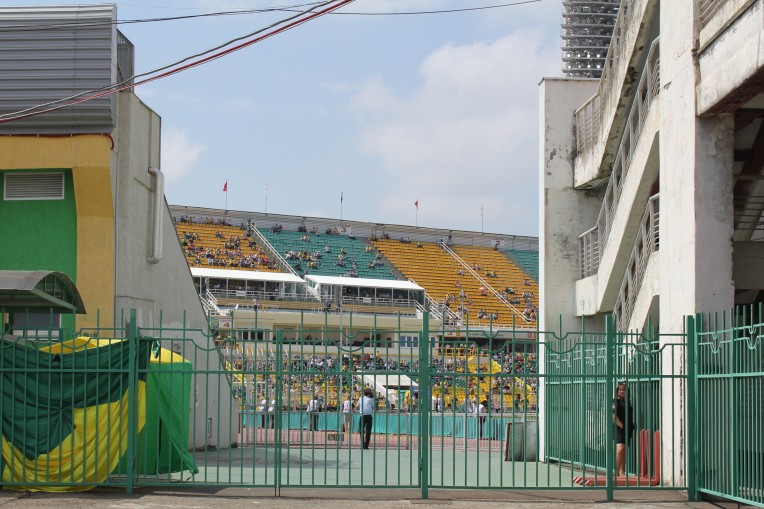 Looking into the Kuban Stadium, Krasnodar.