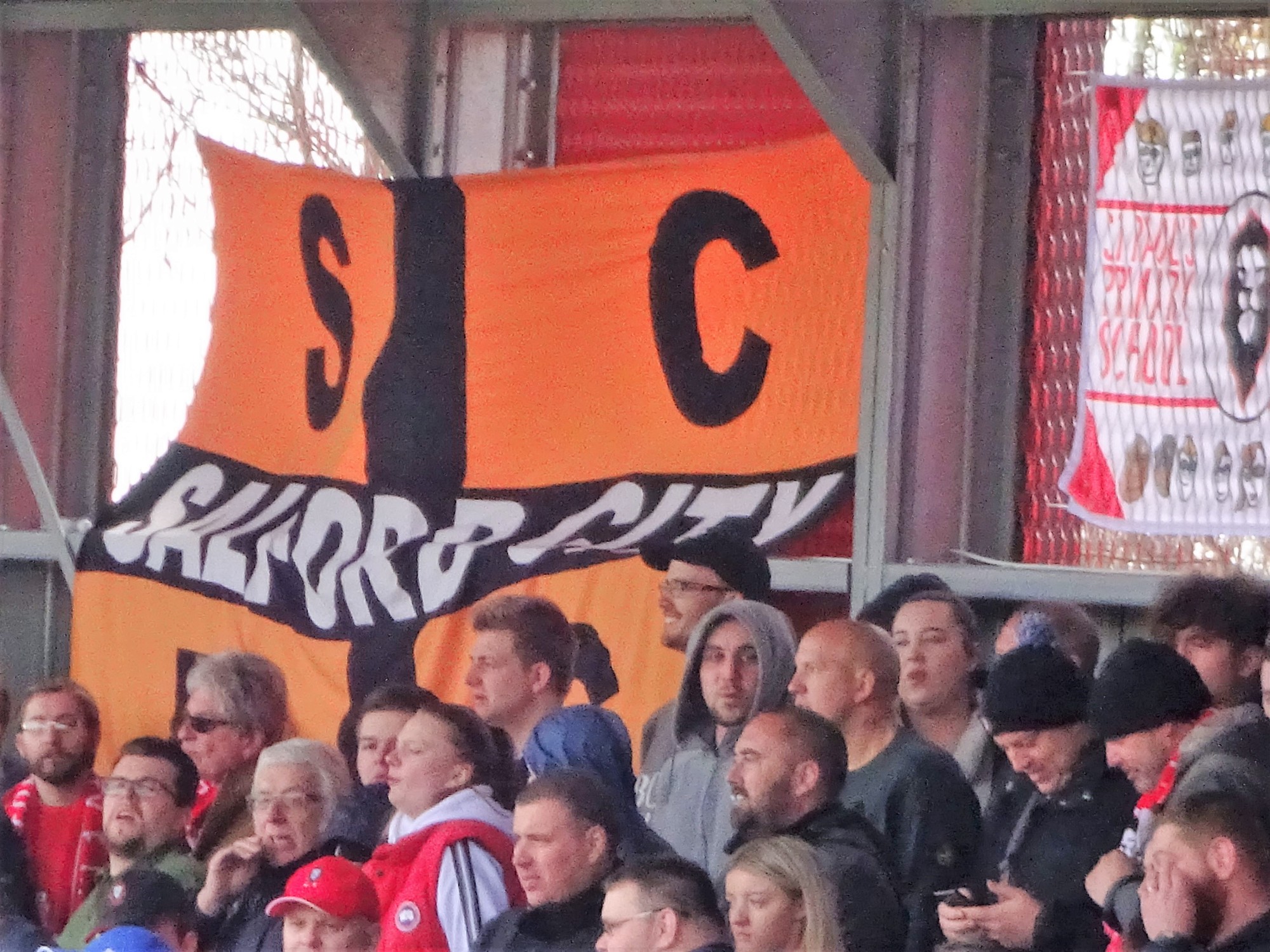 In his latest contribution to Groundhoppers, Michael Grimes finally makes it to Salford City to get a look at the Football League newboys.

Morrissey, who famously posed The Smiths in front of the Salford Lads Club, once opined: “We hate it when our friends become successful”. Salford City, plucked from Northern Premier League obscurity to become the team that non-league football loves to hate, know the feeling. The debate about the class of ’92, and the fairness or otherwise of shooting up the leagues with a budget on steroids, has been well rehearsed by now – so let’s stick to the football as Salford prepare for their Football League debut against Stevenage on Saturday lunchtime.

This trip was third time lucky. My first attempts were to visit Moor Lane, the traditional name for the stadium. First, I ended up at Wrexham following a change of trains at Crewe. The next planned visit stalled in Stockport, where the old-school floodlights of Edgely Park proved too alluring. But when West Ham’s game at Old Trafford coincided with an early kick-off at the renamed, sponsored Peninsula Stadium, I grabbed the chance of a double-header and headed to see the Ammies take on Maidenhead.

Continuing the musical theme, Salford was the ‘Dirty Old Town’ remembered by Ewan McColl and made famous by the Pogues. But there’s little evidence of that on a spring day in Moor Lane, with leaves and blossom budding on a breezy walk from the bus stop.

The ground itself is north of the cities of Manchester and Salford, so I took a bus from Victoria and walked down the leafy, or blossomy Moor Lane, an almost perfect spring walk with a hint of cold breeze. On the left, the ground is down an embankment: red roofs like elongated tin sheds and a sign announcing the stadium. A tenner to get in to see a team chasing promotion to the Football League – and a surprise right through the gate. Instead of the usual burger stand or Portakabin shop there was a series of old shipping containers, painted red of course, on a concourse behind the home end (West Terrace). This has a mini fanzone boasting a real ale bar, small club shop, another bar, toilets and food outlets including a sweet shop for younger (or older) fans. Pithy slogans come straight from motivational handbooks: “You don’t just support a team you belong to it”; “There is no elevator to success, you have to take the stairs”. The latter, not surprisingly, appears on the stair treads; whether down to earth Salford uses ‘elevator’ when it means ‘lift’ is less clear.

Inside the ground, everything feels clean and modern – no surprise given that the redeveloped stadium was opened as recently as 2017. Gone is the old concrete-fronted main stand; its somewhat subdued replacement dominated by the Moor Lane stand opposite, complete with executive boxes at the rear. Behind the goals are two covered terraces. For a more eye-catching feature, look up: the floodlights are arranged in an elongated hexagon to match the club’s redesigned badge. Amid all the novelty, the home terrace maintains a link with the past: St. George’s crosses in tangerine and black, Salford’s colours before the Manchester United gang arrived in 2014 and painted the city red. Looking back across the ground from here offers a bucolic scene: spring trees overlooking the stand, St. Paul’s church spire between the floodlight poles. It’s a genteel backdrop for the hype focused on this northern field.

The game itself, live on BT Sports, was one the reds were expected to win. Maidenhead were in the bottom half, yet safe from relegation. Alan Devonshire, a former West Ham hero now in charge of the Magpies, must dream of having the kind of resources Salford can call on but his team threatened an upset early on. A strong start was let down by poor finishing and that proved costly when Salford showed how it should be done. Rooney (not that one!) crossed for Dieseruvwe to prod home, Touray increased the lead on 26 minutes before Rooney tucked away a penalty. Game over before half time and little of note after the interval.

Defeated but undaunted, the few hundred travelling Magpies still made some noise, drawing answering taunts from the home end. Where did the home fans come from? Today’s crowd is close to 2,500 – unimaginable before the takeover, even if it’s nothing special for a Football League outfit. Closer inspection revealed a few Man. Utd shirts on display – and another visitor to Old Trafford for the West Ham game. This chap was an Eintracht Frankfurt fan who would be supporting the Red Devils later in the day. Not just a typical glory supporter, this turned out to be a lasting, personal grudge: in Frankfurt, I learned, Eintracht are regarded as the rightful winners of the 1976 European Cup Winners’ Cup semi final, due to the unseen hand of Frank Lampard Snr on the goal line as the Irons won the second leg 3-1 and advanced to the final. Maybe football fans never get over this stuff and if The Eagles never make it to another Euro final I expect it will be carved on to his headstone. Despite our differences, we enjoyed a pleasant chat about his regular trips over here for the football.

But do Salford deserve the backlash they’ve suffered since becoming successful? Not really. In the end, what started as something that felt like it might be more business than pleasure turned into an enjoyable day out. The atmosphere is laid back, the facilities for fans are good. Overall, it was better than expected and Salford should be a good day out for League 2 fans and hoppers recompleting their 92 Club.

Interested in writing for Groundhoppers? We’re always happy to have voluntary contributions (but there’s no money in it, this is a hobby site not a commercial one). Drop a line via the about us page and we can work something out.

Bright red roofs on the stands at Salford City’s ground.

New sponsors and a new image for Moor Lane, Salford.

The lion mascot is more cuddly than the beast on the new Salford City flag.

The home terrace fills up at Salford City.

Salford’s visitors, Maidenhead, come from the constituency of then Prime Minister Theresa May, a fact not lost on the sign writer in the club shop. 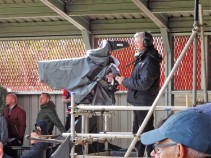 Part of the TV crew at Salford City.

One thought on “Salford: success in the face of envy”