The intersection between Championship Manager and real life is renowned. Supposedly cited in at least 35 divorce cases, the game has spawned a whole bunch of virtual stars whose real life football careers amounted to far less than their cyber-legend. Pick of the bunch was Tonton Zola Moukoko, but every gamer has a nostalgic gleam over someone who achieved more on a computer than on the pitch.

For me, one of those players was Iyesden Christie. Not in the Moukoko class, he was a highly dependable lower division striker. Allied with the free transfer signing of teenage midfielder Matthew Smithard, he could be relied upon to get a team like Darlington a couple of promotions, even if he wouldn’t quite reach the heights of starring in a retro blog that hinged on Grimsby’s unlikely Champions League triumph of the late 2000s.

Nonetheless, it was quite a thrill to catch up with him unexpectedly on Boxing Day 2015 at an Evo-Stik League Premier game for Sutton Coldfield. Rushall Olympic provided the opposition, a local derby. Coles Lane, a fine old-school venue, even allowing for the plastic pitch, wasn’t exactly filled to overflowing, but there was festive cheer in the air and a band – drummer and trumpeter – wafted the strains of La Cucaracha into the frosty air. And there he was. Close to 40 (close to my age, a rare thrill now that players whose dates of birth are in the 90s can hardly be classed a ‘prospects’ any more), rugged, barrel-chested, playing as the target man up front. He did well, an assist on the opener in a 2-1 Sutton win and was still in action this season for Bedworth United.

It probably wasn’t the first time I’d seen him. Unlike the great Moukoko, whose English career never progressed beyond Derby’s reserves, Christie had a decent stint in the lower divisions and even made a Premier League appearance with Coventry. Certainly, our paths would have crossed during his time at Leyton Orient (58 league appearances, 12 goals) which coincided with my spell as a stringer for a London sports reporting agency and frequent trips to Brisbane Road. Maybe I caught a glimpse of him at Mansfield on my one trip to Field Mill; he also played league football for Rochdale and Kidderminster before dropping into the non-league game and an eventually embarking on an extended tour of the smaller clubs of his native Midlands. Polishing a couple of virtual medals from Darlington along the way, perhaps? 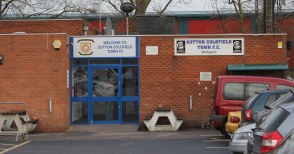