Jarrow FC, the Northern League’s newest recruits, had found their first week tough. A hard-fought 1-0 home defeat to Durham City was followed by a 6-2 drubbing at Northallerton. And when the Wearside League champions found themselves 2-0 down at home to Easington Colliery in the space of 15 minutes or so, it felt like they were on a steep learning curve.

But small margins can make a big difference in football. Jarrow rallied, getting a foothold in the matchas the first half wore on. Then, moments after the visitors hit the post with a free-kick, the home team produced two goals in a minute to turn the game around. An even, entertaining second half was settled by a third Jarrow goal, Max Kirkham lifting the ball over the on-rushing Kyle Donaldson in the Easington net to spark the celebrations. A first ever Northern League win for a team whose long history has been largely spent in local football, and a building block towards a future at this level.

Jarrow is one of those clubs that it’s easy to warm to. Even a cursory glance at the Perth Green Community Centre suggests a dedicated crew doing their best with the resources they have. It’s not a spectacular venue: the recent addition of floodlights and a pre-fab stand upgraded a playing field into a ground that meets the grading for Step 6 football. It lacks the dramatic setting of some of the more modest facilities in the region – no medieval Richmond Town backdrop when you’re using a plot of land between railway line and A19. But every inch is spick and span, the playing surface is immaculate – “if you can’t play football on that, there’s something wrong with you,” commented a member of Easington’s committee – and the love for the team and its facilities shines through.

That commitment was rewarded by a decent crowd – well into three figures, and swollen by curious groundhoppers updating their Northern League sets. There’s evidence that the club can attract and maintain local interest, not least through a supportive partnership with the Red Hackle, the pub on the housing estate that surrounds the ground. For a team that few picked as prospective Wearside League champions last season – Redcar Athletic were most people’s favourites – there seems to be every potential to meet the challenges of an elevated status.

On the playing side, progress took a little longer. At times, especially in the early exchanges, Jarrow were simply too passive, particularly in midfield. Stepping up a level brings new challenges, and the need to play your very best football in every game can be one of them. Jarrow looked raw at times, but patient coaxing from the sidelines helped the players grow in confidence and composure. After those quick goals, there was a visible boost in self-belief, an extra snap in the tackle, a willingness to close that extra half-yard and make life tough for Easington. It bodes well for the rest of the season.

Groundhoppers Blog recently released its first E-book, ‘Ancients and Mariners’, following the stories of the teams in the 2016-17 Northern League season. Featuring all 44 clubs who started the campaign, and six interviews with club chairmen, it’s available from Amazon for just £2.49.

The stand at Perth Green.

The teams emerge for the Northern League Division Two match between Jarrow and Easington Colliery. 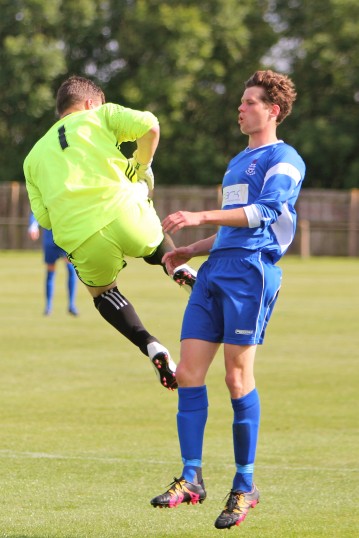 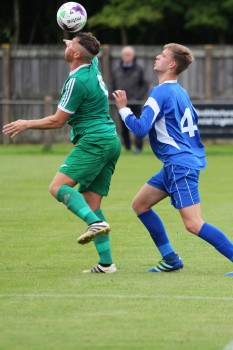