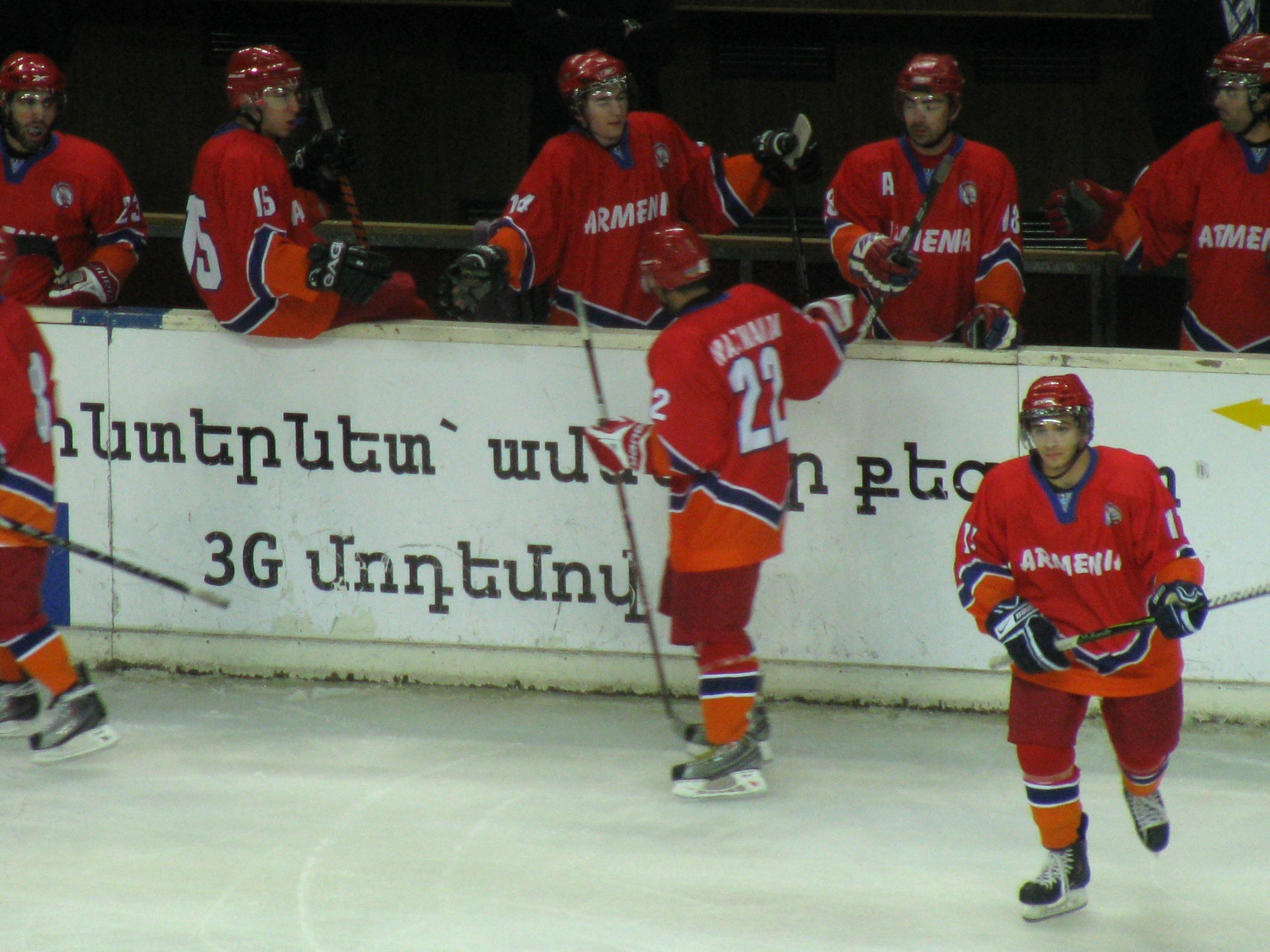 It’s not often a World Championship Division 3 hockey tournament attracts 9,000 fans to an arena. It’s not often the action is screened live on national TV. But in Yerevan in 2010 things were a bit different: huge media attention, capacity crowds in the country’s most prestigious indoor hall … and an argument that resulted in the hosts’ disqualification.

Like a lot of former Soviet republics, Armenia witnessed a once-strong sporting tradition evaporate in the chaos of the 1990s. A domestic football system that once produced a Soviet champion, Ararat Yerevan, was denuded to an Ozymandias of a national league where teams like Kilikia Yerevan were squatting in the relics of imposing stadiums. Hockey, the other great Soviet team sport, all but disappeared. Although the Armenian Soviet Socialist Republic provided the USSR’s goaltender for the 1956 Winter Olympics: Grigory Mkrtchyan helped the Red Machine to its first Olympic gold, as well as winning two World Championships, winter sports never had a major hold on the public imagination in this sunny southern republic. A small local hockey league restarted in 2000 but failed to capture much attention; adventures on the international stage were even less successful. The country was unable to compete in 2007 due to visa problems and was then suspended after refusing to supply passport information for its players on the eve of a tournament in Sarajevo in 2008. Hosting in 2010 was an attempt to redeem the game and rebuild Armenian hockey.

Things began well enough: free admission to the games attracted thousands to the Karen Demirchyan complex to watch Armenia’s games, and the crowd saw comfortable wins over South Africa and Mongolia, interspersed with a narrow victory over the North Korean roster that was set to be the biggest rival for gold and promotion to Div. 2. The 1980s Soviet-built arena, designed to resemble a giant bird spreading its wings, was more commonly used as a concert venue or a stage for ice dance shows – Russian figure-skating legend Evgeni Plushchenko was the guest of honour at the opening ceremony – but it attracted ever-increasing crowds as Armenia homed in gold.

By the time of the decisive game against the Koreans, the arena was full beyond its capacity. Armenian flags were flying proudly and the atmosphere was bubbling. A 5-2 Korean win dampened some of the fervour, but the evening still ended with a passionate impromptu rendition of the Armenian national anthem following the presentations. On the face of it, the tournament had made great strides in promoting hockey in the former Soviet republic.

Unfortunately, even before the medals were presented there was anger among some of the rival teams. On the eve of the medal games, South Africa’s coach Ronnie Wood criticized Armenia’s hosting, saying he wouldn’t be willing to bring a team back to the former Soviet Union for future tournaments after a series of arguments about ice times and game preparations. As Armenia romped to a 15-0 win over Mongolia, Wood also protested that many of the Armenian players were ineligible to play international hockey for the country, having been found playing college hockey in the US and fast-tracked to Armenian citizenship in the run-up to the competition. Following an IIHF investigation, the host nation’s results were expunged and the country was banned indefinitely. For five years Armenian hockey remained in the doldrums until delegates came to the 2015 forum in Prague with plans to develop a new program for the game.

Should Armenia return to international hockey it would reignite a tradition that dates back to the 1960s. The country’s name first appears on the ice in 1962 when the Armenian SSR lost 1-0 to Lithuania in an all-Union competition played in Sverdlovsk (now Yekaterinburg). Post-independence, Armenia first featured in IIHF play in 2004. For two tournaments they couldn’t win a single game, and suffered a record 48-0 defeat against Mexico. But in 2006 victories against Luxembourg and Ireland showed that there was hope for Armenian hockey. Progress was halted by those eligibility scandals; the future remains uncertain.

No free seats in the Karen Demirchyan arena, Yerevan, as Armenia hosts the 2010 IIHF World Championship Division 3B.

Armenia’s players celebrate a goal during a 15-0 win overMongolia during the 2010 IIHF World Championship Division 3B.

A lone North Korean fan watches his country play Armenia in the final of the 2010 IIHF World Championship Div. 3b in Yerevan.

A big crowd at the Karen Demirchyan arena, Yerevan, as Armenia hosts the 2010 IIHF World Championship Division 3B.

A big crowd at the Karen Demirchyan arena, Yerevan, as Armenia hosts the 2010 IIHF World Championship Division 3B.

South Africa head coach Ronnie Wood and GM Jeremy Stevens behind the bench during their team’s 8-3 win over Mongolia in Yerevan.

Armenian players during the 2010 IIHF World Championship Division 3B.