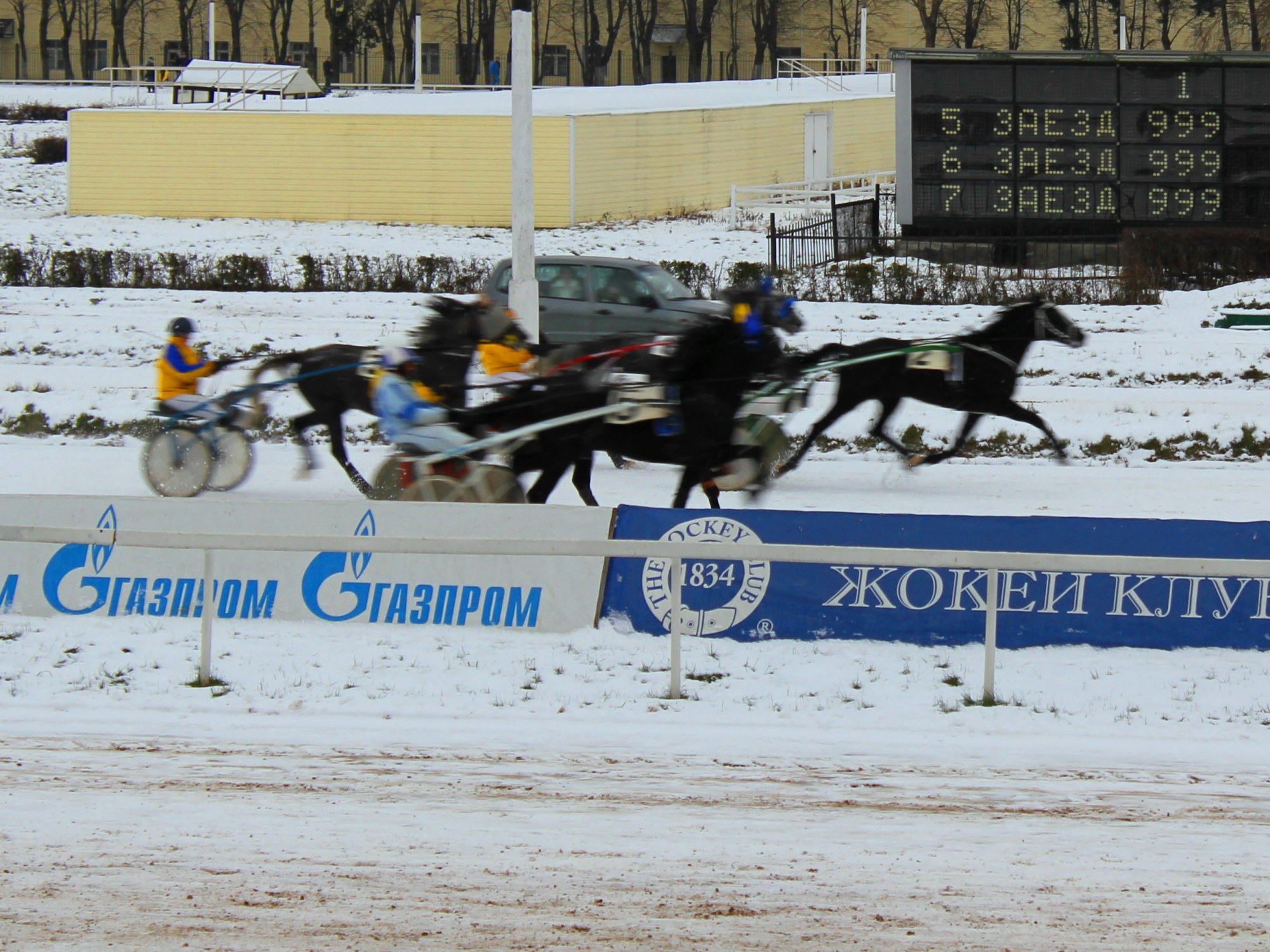 This blog originally appeared in January 2014 at Russia! magazine

Horse racing has a long history in Russia – the first racetrack in the country opened more than 200 years ago. While the sport’s aristocratic leanings saw it struggle for much of the 20th century, its place in Russian culture was assured early, thanks to the pivotal scene in Tolstoy’s Anna Karenina where Vronsky falls from his mount and Anna’s reaction betrays their illicit affair before the brightest lights of Petersburg society.

Today it still has the power to attract the upper echelons, most notably at the annual Presidents’ Cup where assorted CIS and Russian provincial leaders are represented by their territory’s finest steeds in an outbreak of geo-political glad-handing masquerading as sporting fun.

Mostly, though, what Europe knows as the Sport of Kings and the Arab world sees as a mark of pride and prestige goes largely under-observed here in Russia. Indeed, when the 2010 anti-gambling legislation was passed and the casinos were outlawed the very future of the sport was called into question. It took some time to convince the authorities that betting on the horses was a matter of skill rather than chance, and as recently as 2012 a newly established Totalizer came into being to provide the revenue which keeps Russia’s small clutch of Hippodromes alive.

And they are not so much alive as teeming with the kind of life seldom seen by fleeting visitors to Moscow. Despite the splendid 1950s grandstand and the expensive looking restaurant tucked into one end, the vibe is more run-down than red carpet. In a city which has specialized in making many everyday experiences into an ‘elitny’ exhibition, there’s something refreshingly – or alarmingly – down-to-earth about these followers of the turf.

The crowd, it’s true, is not huge: temperatures hovering around freezing, a scattering of snow and a punitive midday start on a Sunday keep many away. And, for all the promise of free admission to the fashionable readers of ‘Time Out’ magazine, the ambience is not hugely family-friendly – and especially not hipster happy. Amid a sea of middle-aged men, those somewhat grey-hued comrades most often encountered making a last-gasp dash to the corner shop before the curfew on alcohol sales kicks in, the few hip young gunslingers who made the trip are distinctive with their designer facial hair, stylish man bags and brightly-colored jackets. On arrival, one elegant blonde was already frantically seeking the exit, having stumbled into the crowded bookies-cum-buffet and caught a glimpse of a rough-and-ready world she’d not expected to find.

The experience is very different from racing back in Britain. There’s no pretense of trying to attract a more cosmopolitan crowd; the entertainment is limited purely to what happens on the track (harness-racing today, mostly mile-long trials for two-year-olds which might just make the grade for next season’s big events). Facilities are rudimentary, and the punters offer a handy crash course in Russian invective for the uninitiated.

It’s all a bit of a contrast with the elevated idealism embodied in the monumental 1950s architecture. Like many sporting venues built under the influence of Stalinism, it strives to promote the body beautiful and the inherent value of a healthy sporting attitude to life in general and the building of socialism in particular. But while the grand stadia and parade grounds of the age are shrines to muscular human prowess, here the horse is king. The triumphal classical frontage draws its inspiration from the ancient world: friezes of chariot races are topped by a four-harness sculpture reminiscent of the façade of the Bolshoi Theatre. At the opposite end, providing a slightly awkward asymmetry, a tower is flanked by prancing statues and topped with a spire which echoes the distant spike of the Stalinist skyscraper on Kudrinskaya Square which pierces the far horizon. In a concession to function, though, the traditional red star is replaced by an equestrian weather vane.

Inside, while the entrance for the common punter exudes faded grandeur, things are more basic. The indoor betting hall is smoke free, yet maintains the ambience of a seedy below-stairs bookie where generations of anxiously smoked cigarettes haunt the air. As furrow-browed punters muttered to themselves over their form guides, the tannoy was playing the slightly mawkish ‘Bird of Happiness’ by Nikolai Gnatyuk with its refrain of ‘Vyberai menya’, or ‘Choose me’. Those who could read these omens ended up in profit, as the next race was won by a horse called ‘Vybor’ (Choice), which lived up to its name and proved to be the right selection.

If budget or tastes dissuade you from joining the VIPs assembled behind the plate-glass windows of the restaurant, with its commanding view of paddock and post, spectator accommodation is basic: wooden benches at best, but most prefer to stand. And yet, above it all, an exquisitely painted (and seemingly not long restored) ceiling hints once again at a grandeur half-forgotten.

And therein lies the grubby charm of the Hippodrome. Unlike the luxuriously renovated (and equally luxuriously priced) Water Stadium just inside the MKAD, the Hippodrome retains a sense of being lived in. It’s still very much open to a past generation of fans of the turf, the men who started coming here as youngsters and remained, captivated by the thrill of the contest, the adrenaline rush of a wager and, perhaps, the distant dream of a huge win. In a city where too many historic sporting venues are being gentrified to the point where the ordinary fan is forgotten in the rush to lure the VIPs, this makes the Hippodrome worth a visit – if only because it’s hard to imagine it will survive indefinitely in this form.

Trotting races are held regularly at the Hippodrome on Sundays from midday. Tickets cost 300r. For a more detailed timetable, and news of special events such as the Grand Prix Monte-Carlo, see the website (Russian only).

Taking a laid-back view of the card

Part of the painted ceiling at Moscow Hippodrome 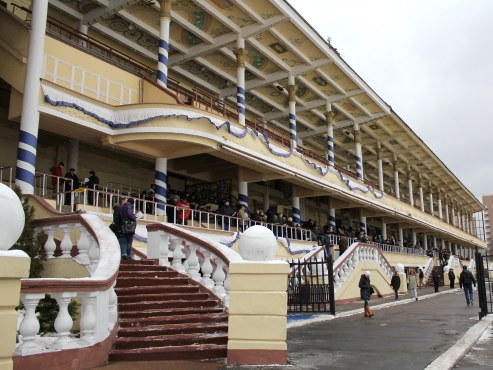 The imposing grandstand at Moscow’s Hippodrome 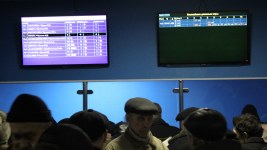 Gamblers in the betting shop in the grandstand.

Part of the painted ceiling at Moscow Hippodrome 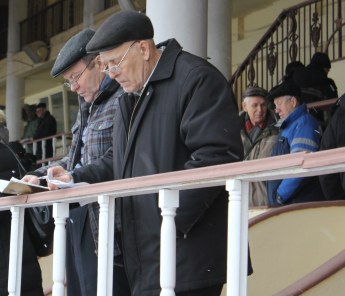 Punters study the form between races 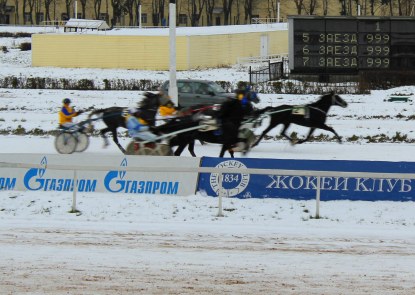